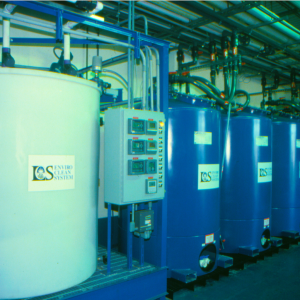 Leading Technologies is a computer part manufacturer, located in Leechburg, PA.  Its’ management set out to implement a plan to recycle a percentage of its process rinse water, since a 30% price increase was scheduled for municipal water sewage charges.  De-ionized water is used for rinsing the lead frames.  The rinse stream is of high quality except for the plating chemical contamination resulting from rinsing off the production parts.  Plant personnel identified the following recycling problems and constraints:

Leading Technologies requested Lewis Environmental Services, Inc. to conduct a field demonstration test for the destruction of cyanide and the removal of silver and copper from a cyanide rinse stream generated at their plant located in Leechburg, PA. The purpose of the test was to demonstrate the viability of simultaneous destruction of cyanide  and heavy metal removal with granular activated carbon, known as Lewis’ ENVIRO-CLEAN PROCESS.  A cost estimate for a full scale system was to be determined based on the results of the field demonstration test.

Over a seven month period, the average recycle rate has been approximately 35 – 40 gpm. The comprehensive sampling program has continued for the length of operation. The average feed concentrations for cyanide, silver and copper were 2.1 mg/l, 0.27 mg/l and 0.55 mg/l respectively.

For the same time period, the average effluent concentrations for cyanide, silver and copper were non-detection to <0.01 mg/l. The system processed in excess of 5,500,000 gallons of water before requiring its initial filter change out. The prior , Leading Technologies utilized in excess of 72 million gallons of water annually for their process, since installation of the LES system Leading Technologies has realized a reduction in water usage to 41 million gallons annually. That is real water savings of over 31 million gallons annually. The economics of the water recycling drastically improved because the local water authority increased sewer rates by 30% the next year.

The proprietary treated activated carbon system simultaneously destructed cyanide and removed heavy metals from a rinse stream. The ENVIRO-CLEAN PROCESS produced an effluent of high purity, suitable for recycling on computer component electroplating line. The activated carbon demonstrated it’s capability to remove heavy metals with average removal levels for silver and copper of 99.1% and 98.1% respectively. The system produced average silver and copper effluent concentrations of 0.009 mg/l and 0.005 mg/l respectively. The system simultaneously destructed the cyanide to non-detection levels with a 99.8% removal level. The average cyanide feed and effluent concentrations were 6.0 mg/l and 0.01 mg/l respectively. The effluent was crystal clear at all times and exhibited no color. This effluent was directly recycled to the production line at the primary rinse station(s).

Review of the recycling economics is very exciting. Leading Technologies verified the following savings even though they are only recycling 62.5% of the initial projected volume. Comparing the expenses for the month of the previous year verse the current month of operation with the Lewis system yields the following results:

The annual chemical and sludge disposal costs are listed below:

Actual water savings on a yearly basis combined with the chemical and sludge savings yields a total operating savings of $249,197 per year!   No single technology on the market today has the been commercially demonstrated to remove heavy metals, catalytically destruct cyanide and recycle water and reduce chemical usage and sludge disposal cost.  Also, this system offers the customer a real pay back period in 0.8 years.